The husband and wife team that sits as President and Vice President of Nicaragua, Daniel Ortega and Rosario Murillo, are frequent subjects of cartoonist Pedro X. Molina’s pen. 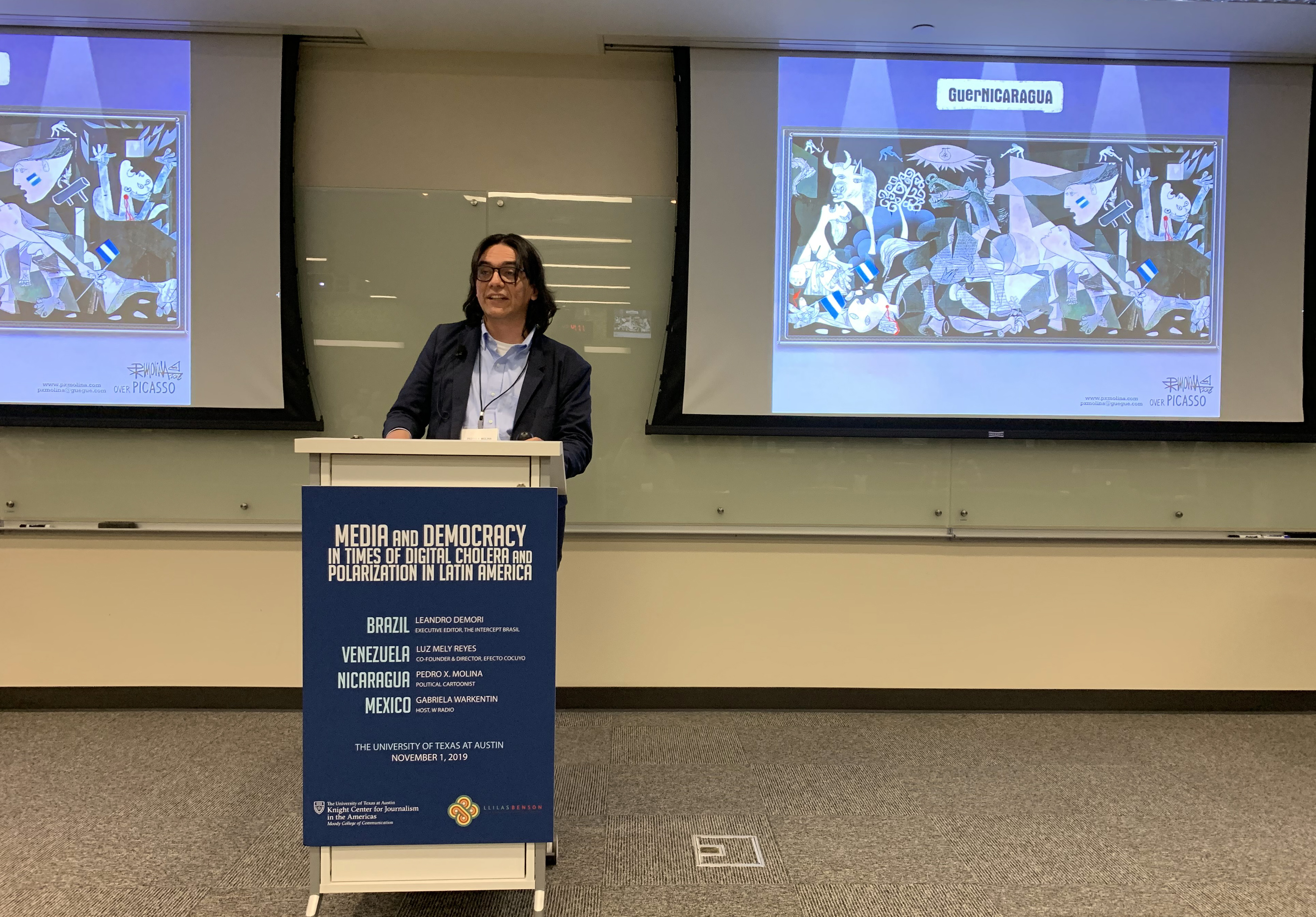 Cartoonist Pedro X. Molina speaks during an event on media and democracy at UT Austin on Nov. 1. (Teresa Mioli/Knight Center)

His illustrations contain references to their similarities with past dictators, to their spending extravagances, to their attacks on independent media outlets, and of course, to their roles in the deaths of nearly 400 people who were killed in the context of protests that began in April 2018.

With the help of these cartoons, Molina told students, faculty and members of the public gathered at the University of Texas at Austin on Nov. 1 about the current political crisis Nicaragua is experiencing and how critical media have become targets in the process. It was part of the event, “Media and Democracy in Times of Digital Cholera and Polarization in Latin America,” hosted by the Knight Center for Journalism in the Americas and LLILAS Benson Latin American Studies and Collections.

The position the country is in now did not start on April 2018, as Molina explains it.

“For more than a decade, we have experienced a continuous erosion of all our fundamental civil and human rights in Nicaragua, including electoral fraud, a corrupt justice system, a criminal Congress and an executive power whose only function is to remain in power no matter what,” Molina said. “Electoral fraud, repression, corruption, abuse and killings have been rising steadily for a decade. It’s not something that just exploded last year.”

Yet, demonstrations took hold in the country following a proposed reform to the social security law more than one year ago.

One of those killed during the protests was Angel Gahona, a journalist killed with a single bullet to the head while broadcasting on Facebook Live.

As things got worse for the general public, so did the situation for independent journalists.

“Journalists were harassed, beaten, and robbed in the streets by the forces of the regime,” Molina said. “Radio stations were burned and newspapers started having problems printing their daily editions because the government wouldn’t let them import the paper and ink they needed. The most visible journalists received threats of jail and death through social media.”

“The next day, the journalists found themselves borrowing computers so that they could denounce the aggression,” Molina said. “Since we were still producing content for the people, Ortega and Murillo weren’t happy. Somehow they were thinking that by taking away our equipment, we will stop reporting what was happening. But we didn’t, of course. Things no longer work like in the 70s.”

The police came back the next day, occupied the building and are still there today.

A week later, the police forces raided independent TV station 100% Noticias and arrested the owner of the station and news director, charging them with promotion of terrorism, as Molina explained.

“By that time, it was pretty obvious that the government was hunting down independent journalists. The level of the threats many of us were getting went up. Now they were not only threatening us with jail or death, but they were also starting to mention details about our private lives and our families.”

About 60 independent journalists have had to leave the country, many of them continuing to work outside the country.

To do the critical work he does, Molina found a home at digital site Confidencial. This happened prior to the April 2018 protests.

“I am able to keep doing this because I found myself a spot in a strong, determined group of people with whom I can do this kind of thing. It’s very important for us to get together and try to find ourselves with other people who are thinking alike and really, really trying to make a difference.”

As Molina explained, he joined the site after leaving print newspaper El Nuevo Diario following its sale to people who did not want to attract the ire of the government and who therefore asked him to not draw about it. 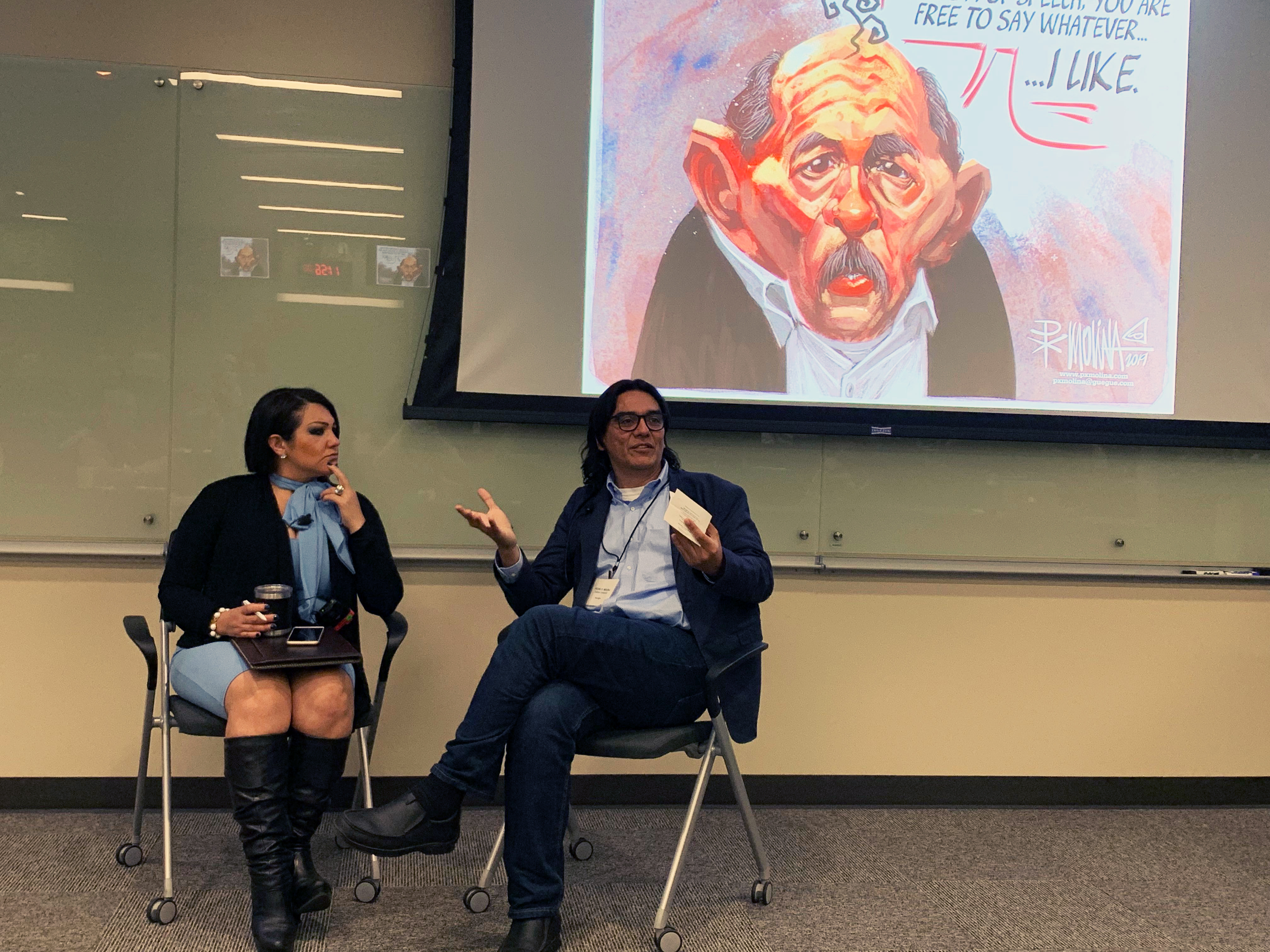 “People ask me if things are cooling down in Nicaragua right now,” Molina said. “My answer is that things are even worse now.”

Protesters cannot go out into the street, killings are still happening and political prisoners are harassed. As far as the independent press, El Nuevo Diario had to close because of a lack of printing materials. Print newspaper La Prensa was forced to change its format and reduce page count. Additionally, independent journalists are still being physically attacked.

“Everyday, things get worse in Nicaragua while the world seems to forget a little more about it,” he said.

Joy Díaz, producer of the radio show Texas Standard and moderator of a talk with Molina, pointed out similarities between Nicaragua and the U.S. and asked how the latter country might learn from the former.

“By trying to care about what is happening down there. People over here, I have a feeling that they just care about ‘this will cause more people to get into the States’ and that’s it,” Molina said.

Díaz also asked Molina what he would like to be remembered for.

“I don’t care about people remembering me. What I do want people to remember is maybe my work or the reason I do my work,” Molina said. “This idea of being free, of being able to say whatever you want about the society in which you live, and don’t take anything for granted. To be very skeptical and very critical of everything we see and care about each other and care about politics.”

Nicaragua’s Public Employees: “When Does this End?”

Nicaragua: Medardo Mairena Calls for Unity and an End to the Killings

Nicaraguan Peasant Movement Demands “True Unity” to Opposition Coalition
Nicaragua’s Public Employees: “When Does this End?”
Nicaragua: Medardo Mairena Calls for Unity and an End to the Killings

Send this to a friend